The conventions packing those downtown hotels have been cancelled. Professional and college sports are on hold. 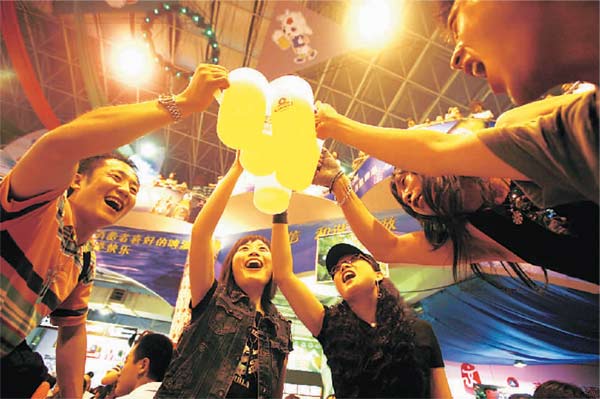 Spiteful Brewing has carved out an admirable niche since launching in 2013, scoring tap handles at well-trafficked downtown hotels, popular restaurants and major venues that include the United Center.

But as the COVID-19 epidemic has snowballed in recent days, years of account building is suddenly for naught as the wheels of business, culture and society grind to a pause.

The conventions packing those downtown hotels have been cancelled. Professional and college sports are on hold. Popular restaurants are likely to become far less popular as health experts warn against large social gatherings.

Events larger than 1,000 people were banned Thursday by Illinois Gov. J.B. Pritzker while other states have adopted even stricter bans, such as Ohio, which has limited gatherings to 100 people.

Spiteful is suddenly uneasy about its prospects. The business doesn’t feel in peril to its founders, but the fallout it faces is incalculable. It’s a feeling rippling through an industry that has grown from fewer than 100 breweries in the late 1970s to more than 8,000 today. Chicago is a particularly robust landscape, with about 200 breweries.

“When you start aggregating all the business downtown, I think we will see a potential dip in (sales),” brewery co-founder Jason Klein said. “We’ve been growing, so I hope we don’t sell less than last year.”

The beer industry operates with a necessary lag, selling a product made weeks before it reaches customers. As a result, most breweries have little clue what to expect from the coronavirus pandemic. Will sales be up as people hunker down at home? Will sales crater as people pay fewer visits to bars and restaurants? Will the fallout be brewery specific, depending on the business model?

The St. Patrick’s Day holiday weekend will be a crucial barometer. But most telling will be the next week or two, when new rounds of orders come in from stores and bars — or don’t.

“No one seems to have grasp of what to expect,” Klein said. “Everyone is on pins and needles waiting to see what kind of volume moves.”

“It is way too soon to tell on more than an anecdotal basis, and the impact seems to be changing each day,” a spokeswoman said. “We’ll have more data in a couple of months. Supporting your local brewery and other small local businesses could become more important.”

Harry Schuhmacher, publisher of trade publication Beer Business Daily, said the impact of coronavirus became particularly acute with the suspension of professional and college sports. A twofold effect will be felt by mega-beer companies such as Anheuser-Busch and Molson Coors: lost sales in stadiums and arenas, but also no televised games to advertise against.

“Live sports are the life blood of big beer marketing,” Schuhmacher said. “It’s really the last bastion of TV advertising where people are still forced to watch the ads and its a demographic that beer marketers target.”

Even playing televised games in empty stadiums and arenas would have helped salvage the situation for large beer companies, he said.

However, “if seasons are canceled, people are not gathering to drink beer and watch the games on TV in bars or at their houses,” Schuhmacher said.

But craft brewers have made inroads at such venues, and they may stand to lose even more. Schuhmacher said craft breweries, due to being small businesses, are likely to suffer more than the large beer companies.

“Forget marketing — you’re talking about actual sales," Schuhmacher said. "It’s not just venues and hotels and tourists areas and convention centers, but also in their own taprooms. So far we haven’t seen a decline in foot traffic, but I think that’s literally changing overnight.”

The dual explosive news of Wednesday night — cancellation of the NBA season coupled with actor Tom Hanks and his wife being diagnosed with COVID-19 — seemed to have turned the conversation, he said.

“It’s become much more front of mind and by this weekend I think we’ll hear about on-premise traffic (such as at bars and restaurants) noticeably being reduced,” he said.

But there’s still reason for some beer industry optimism: Along with toilet paper and bottled water, there’s anecdotal evidence that people are stocking up on beer.

“We’ve heard it from major chains and a few smaller operators,” Schuhmacher said.

Some breweries are taking drastic steps amid coronavirus concerns, such as Maryland’s Flying Dog and Milwaukee’s Lakefront breweries both closing their taprooms to the public while continuing to make beer.

Chicago has yet to see such drastic action, though Revolution Brewing said Thursday it would suspend brewery tours and Goose Island postponed its annual Stout Fest, which was to be held Sunday. Also, suburban More Brewing delayed the release of a highly-anticipated stout on Friday and Saturday “as a precaution of overcrowding.”

Tickets sales for Beer Under Glass, a festival at Garfield Park Conservatory that kicks off Illinois Craft Beer Week, were postponed Friday, too, according to the Illinois Craft Brewers Guild. Tickets were to go on sale March 20 for a festival scheduled to be staged May 15. The executive director of the guild, Danielle D’Alessandro, said a decision about postponing the event will be made in the coming weeks.

Three Floyds Brewing also said Friday that its annual Dark Lord Day beer release and festival, slated for May 16 at the Munster, Indiana, brewery, would be postponed until further notice.

Yet many local events are going on as planned, albeit it with extra precautions, such increased hand sanitizer, putting away board games and removing self-service water stations. Mikerphone Brewing still plans to stage its fifth anniversary party Sunday at the Elk Grove Village brewery.

“We are taking this day by day,” Mikerphone founder Mike Pallen said. “As of right now my entire staff is comfortable with moving forward with things as planned.”

Lewis said he is concerned about the possibility of supply chain disruptions, and not being able to get things usually ordered with quick turnarounds, such as raw materials or can labels.

Pipeworks, which sells about 80 percent of its beer in cans and bottles — an unusually high number — may be well positioned to withstand the impact of coronavirus.

“But nothing is a certainty at the moment,” Lewis said. “If people are feeling the pinch in the pocket, are they just going to buy PBR?”

As with most other breweries, the answer won’t be clear for awhile.

“It’s all about the sell through rate,” Lewis said. “Things might have already slowed down, but we won’t know until it’s time for reorders.”

Begyle Brewing co-founder Kevin Cary said he thinks of coronavirus like last year’s polar vortex, which ground the city to a halt and put a dent in business. He’s bracing for a bigger dent, and for what this weekend may bring.

He’s already wondering if Begyle’s joint block party with Dovetail Brewery in May may be in peril. The event drew 8,000 people last year. They’re proceeding as if it will happen.

“We’re going to constantly be reassessing what we need to do in the name of our customers and employees,” he said. "A lot of difficult decisions will need to be made, but it’s better to be safe and proactive.”

Cary said Begyle is determined to stick with regular hours as long as feasible — albeit while taking extra sanitary precautions.

“We still want to be here if people want to come out and need a reprieve,” he said.

Cary paused and added: “But if you’re feeling sick, don’t come out.”

Josh Noel has worked for the Chicago Tribune since 2005, and covered beer and the beer industry since 2009. He is author of the 2018 book, "Barrel-Aged Stout and Selling Out: Goose Island, Anheuser-Busch and How Craft Beer Became Big Business." More info...