How To Host A Virtual Beer Festival 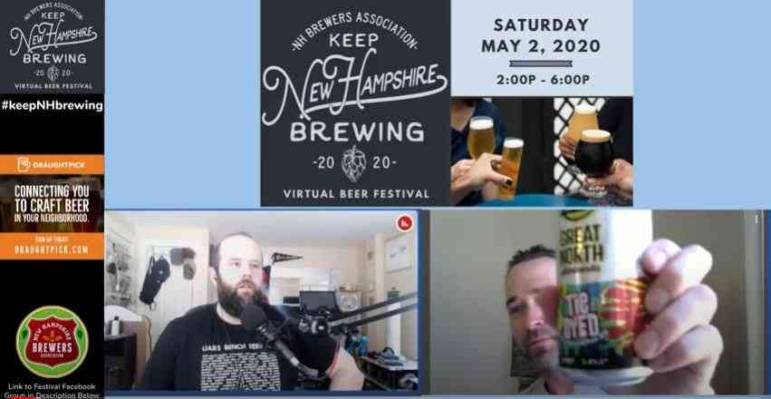 The New Hampshire Brewers Association held the first-ever virtual beer festival last month. And while it was an unusual experiment, organizers say it was a successful model they hope to replicate and improve upon moving forward.

When pandemic closures forced the cancelation of New Hampshire Craft Beer Week, a statewide event scheduled for April 2 to 11 featuring over 150 individual events, the state’s Brewers Association had to scramble to come up with a replacement.

Over a two to three week period they cobbled together their concept for a virtual beer festival, got sponsors on board and connected with brewers to enlist their participation, though a lot of folks were confused at first, according to association President CJ White.

“There was a lot of people who were like, ‘I don’t understand what that is,’” White said.

After all, a traditional beer fest is, among other things, a venue to pour beer and introduce a brewer’s products to customers who are drawn by the promise of, well, drinking beer.

But White had a plan. Brewers would not be able to pour their beers, but they’d still be able to talk about them while viewers at home could drink what they had on hand, or especially curated beers from local brewers who assembled virtual tasting packs.

Ticket buyers got access to a Facebook group where brewers posted videos of themselves giving tasting notes and descriptions of their product, and some joined the event live. Tickets started at $5 and went up to $35 to include a Keep NH Brewing t-shirt. A $65 ticket unlocked the shirt and a VIP Happy Hour where guests could chat with a dozen local brewers.

Stoneface Brewing Company offered up a drone tour of their Newington facility, the NH Highland Games bagpipe group performed an opening ceremony, and Gov. Chris Sununu briefly chimed in with a video address.

“We’re going through some funky times here in New Hampshire, to be sure, so whatever you can do to get out there, support this industry, support these craft brewers all across the state, they really are what makes New Hampshire great,” Sununu said.

“We wanted to keep the festival as organic as possible,” White said.

Over 500 people viewed and chatted online during the event, which raised over $10,000 for the NH Brewers Association. Some virtual tasting packs sold out ahead of the event, and shirt sales continued until the end of May.

New Hampshire was not the first to host a virtual beer fest. The brewers associations in Iowa and Arizona hosted similar events just before. Kentucky held on the same day as New Hampshire, on May 2, and New York, Wyoming and Connecticut hosted their own virtual festivals later in the month.

Moving forward, White expects virtual beer festivals will become the new normal. She said they can happen parallel to in-person festivals and there will be demand for stay-at-home ways to participate, White suspects, since many people may not feel safe going out in public even after restrictions are lifted.

The next virtual festival will be the 7th annual Summer Brewers Festival, usually held in Concord.

“We are likely going to do one early next winter as well,” she said.

Winter festivals have been difficult to schedule in the past, White said, due to concerns that weather may potentially impact traffic. The virtual model will enable them to host a festival even if there’s a blizzard outside.

White said she is looking for ways to make future virtual festivals more interactive and include more ways for guests to get access to virtual tasting packs.

“We’re still trying to figure out how to do a bit more with tasting, and also more one-on-one with more of the brewers,” she said.

They may add some games and more Q&As with brewers, for example.