The Great British Beer Festival is an annual beer festival organised by the Campaign for Real Ale. It presents a selection of cask ales and other alcoholic drinks from the UK and beyond.

The Great British Beer Festival is one of the biggest, most exciting and well-known events in the beer and cider world. Organised by the Campaign for Real Ale (CAMRA) it brings hundreds of real ales, international beers and real ciders and perries under the iconic Olympia roof.

As well as the huge range of drinks on offer, you can enjoy a varied selection of street food and snacks. Entertainment is also included as part of the ticket price with live music in the afternoons and evenings. Why not test your skill on a variety of traditional pub games, and browse the festival shops for pub books, brewery memorabilia and CAMRA merchandise.

Beer experts will be running beer tastings throughout the week to help you learn more about the craft which goes into making Britain’s best beers, and of course one of the most prestigious beer competitions in the world – the CAMRA Champion Beer of Britain – will be judged and announced at the start of the Great British Beer Festival.

The festival is also home to the Champion Beer of Britain awards and is held the first days of August of each year. 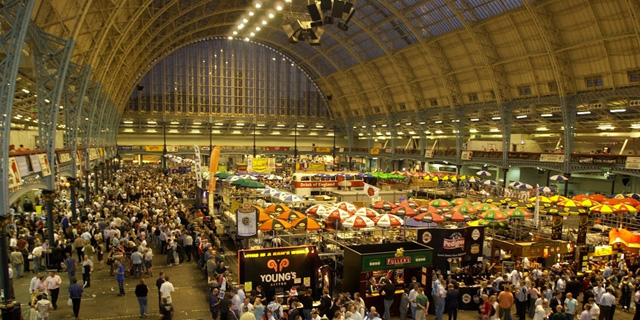 Join the Great British Beer Festival story as it unfolds and see how we go about making sure we have all the incredible beer, amazing food, live music and award-winning brews ready for you. Follow us on social media and become part of the family.